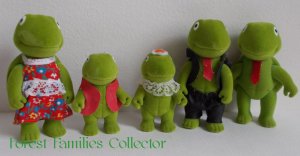 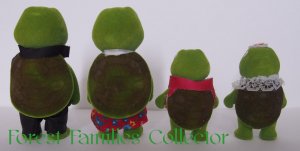 The Turtle Family consists of the basic parents and children set. The body type on the turtles is unique in the FF line, but very similar with beetles. See ID Information for more information. Turtles are soft green with a brown pattern on their shell. Their eyes aren't the traditional FF eyes, but white with black pupils. The turtle father and son have been released both with velvety and papery clothes. This family is pretty hard to find.

There is a rare variation of the Turtle Family, which is brown of colour. The brown turtles have probably been available in Australia and Spain. The Australian version of the family's mother may have worn the "beetle dress" (white with red flowers) whereas the Spanish version wears the more usual, red turtle dress.