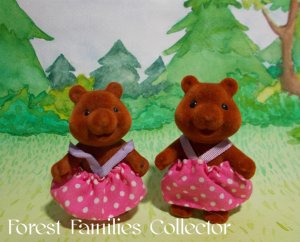 The Bear Family is one of the Forest Families that has more than four members. Usually the families include parents and two children, but the Bear Family also includes bigger bears and tiny baby bears. Where the normal adult bears are about 9 cm tall, the big bears are around 11 cm. The normal sized children are about 6 cm tall and the babies around 5 cm. Bear Family has been published both in the flat-handed sturdy mould and with cupped hands.

Forest Families bears are of a deep reddish brown colour and that's the best identifying help with them. Bears are the one species that has most "fakes" and different series' around, but the reddish brown colour is almost exclusive to the FF line. Of course there are a few other series as well, but if a bear is this colour it's a pretty safe guess that it's a FF bear. 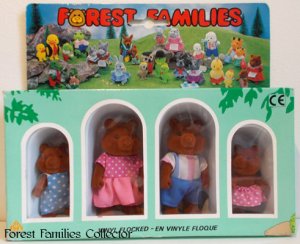 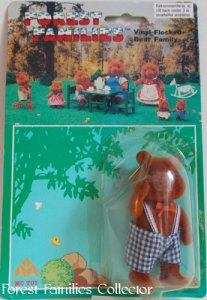 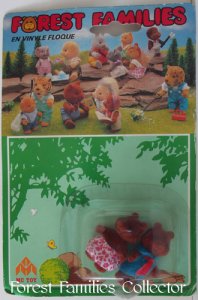 There are rare colour variations of the Bear Family. Two variant colours are likely USA releases - grey and chocolate brown. Also other variations have been found from various parts of the world! 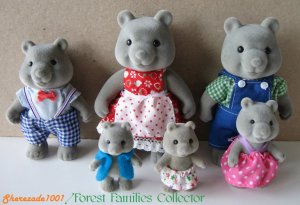 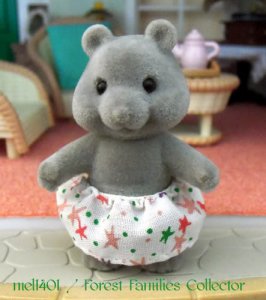 The grey bear family had all the same members (all sizes) as the normal reddish brown family. They came with similar clothes. The grey bears have been published both in the flat-handed sturdy mould and with cupped hands.

It is likely that the grey bears were only available in the USA. 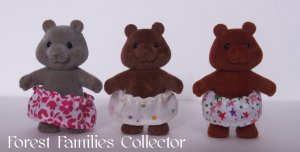 The chocolate brown bear family had all the same members (all sizes) as the normal reddish brown family. They came with similar clothes. The chocolate bears have been published both in the flat-handed sturdy mould and with cupped hands.

It is likely that the chocolate bears were only available in the USA.

The peach coloured bear girl isn't neccessarily a genuine FF bear. She has a shimmery flocking and a sturdy mould. She was bought in the USA. 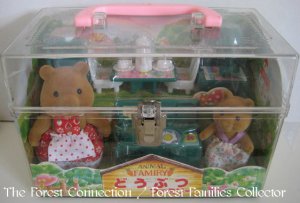 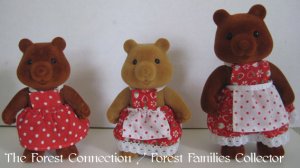 The light brown bears were found in Japan. They were sold in a plastic box with cheap accessories that are usually sold with knockoffs and cheap brands. The bears are of a good quality with beautiful Forest Families clothing. The bear mother has an outfit that is similar to the big bear mother's usual dress and apron.

This set of mother and daughter was sold in the pictured package and also a smaller house-shaped box that didn't include any accessories. 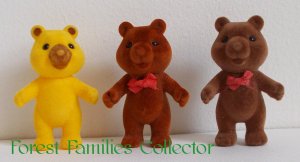 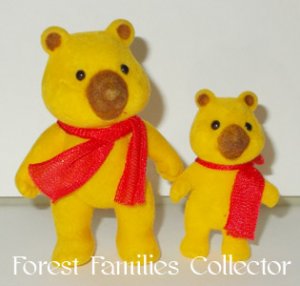 The yellow bears are from Denmark. They are not genuine Forest Families bears and are fakies of a Danish character Bamse from Bamses Billedbog. They are yellow with a brown muzzle and ears. They are of a slightly lower quality than your average FF. There are adults and children and both came with a red scarf like the original Bamse.

I'm looking for several of the grey, chocolate brown and light brown bears! Please let me know if you have them to sell or trade!